Daniel Rotsztain is an artist, writer and cartographer who goes by @theurbangeog on social media. He is the Map Animator for Cartography 17 and the person in charge of leading the Cartography 17 activations.

Read Part 1 of the interview HERE & find his personal portfolio at www.theurbangeographer.ca

It’s a really exciting moment for the city. There’s so much energy in this city and so many perspectives and I think, again, with Canada 150 and Resistance 150, it’s this time to crack open our notions of what this city has been and embrace the multitude of perspectives that have existed this whole time. I think people are ready for that. I don’t know what it is.  There are more movies that are set in Toronto, more books about Toronto, more songs about Toronto and people are good natured and seeking reconciliation and openness and I just think that now is the time to be like “Here’s the city”.

Exactly! If we have something that illustrates this, then it does a lot for when Toronto is actually on the map and people want to find out more about Toronto. 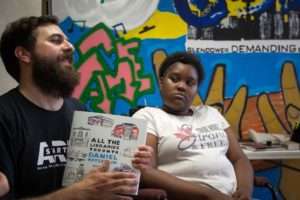 Yeah!  Our first workshops were with the seniors from Unison Health and Lawrence Heights and they were adorable and lovely and so excited to share their stories. Just beginning the project with elders in this city and seeing how much they relish the opportunity to share their stories…I mean there’s ups and downs and sometimes we’re working with kids, and every workshop there are a few people who don’t care and there are a few people who are so into it, but I just I think like as a source of strength as we go forward I’ll just think about that first workshop and like how much like the opportunity for those seniors to tell the stories of Lawrence Heights meant to them.

The gatekeepers of the stories have been the same white bald dudes for so long, and I’m a young white man and I see the position I’m in as dissolving my own power that courses through me… and I just think, like we’ve talked about before, that it’s time for different stories and it’s time for other voices. My facilitation of this map is of other voices.  That’s the thing about a cartographer – when you look at a map, their name isn’t on the bottom right corner. A cartographer renders themselves invisible once the map is done and I hope to do [that]. Dissolve the colonial power of the map, use my privilege to do that and then step away and let it be. Let it sing itself! 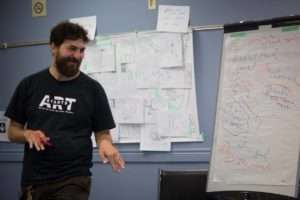