Vanessa Tang is one of Art Starts’ Event Document Associates(EDA) this summer and has been working directly with Julian Carvajal, Arts Starts’ Special Projects Manager, who is responsible for Cartography 17. She is a Film student who enjoys film and editing and is hoping to pursue a career in that field.

For those who do not know you, can you introduce yourself and tell us what you do here at Art Starts?

My name is Vanessa Tang and I am an Event Documentation Associate(EDA). I am a student at Humber College, North Campus and I’m going into their film and TV program. I am currently working at Art Starts as one of their EDA, which sounds much fancier than it really is. To simplify it, I am the videographer and editor for Art Starts events and I am currently working on Cartography 17, which you can find out more about on artstartsto.com.

As a part of the Cartography 17 artist team, what is your medium and contributions?

I’m well versed with the DSLR camera but I am more confident with editing.

Well, I was hired by Art Starts, thankfully! I was given the opportunity to be one of their videographers.

Well Cartography 17, for me, means a medium of representation for small communities. Personally, I live in a small community as well, and we’re very isolated from the very large and rich communities that one would know. It’s really nice to have this chance for the youth, the elderly and for teenagers to put their voice in a map that represents their home. 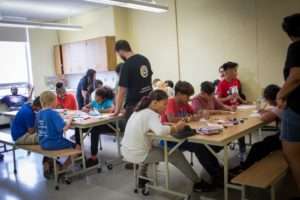 It’s good that we have some Indigenous consultants coming in and teaching the people about our land, where it came from and the history behind it and also showing how colonialism has taken over and changed the map of Toronto. I think it’s important because most of the grant money for Cartography 17 was from Canada 150 and there has been some recent conflict with Canada 150, especially with Indigenous groups.

Recently, we went to the Neptune community and I met this little girl and she was super cute and she was just drawing the little map and she was telling me her [stories] like “…I go to this place. That’s where the waterpark is and that’s where we go in my neighbourhood to have fun!” It’s really nice to just talk to someone and get to know their neighbourhood.  I’ve never been to Neptune before so when I first looked at it, it just looked like any plain neighbourhood but once I heard her story, it was like Oh! There is character and memories in these neighbourhoods that other people can connect to as well.

It’s important to create an inclusive map for Toronto mainly because of the multiculturalism in our city. There are newcomers coming and there are people who would have never thought that they would be living in Toronto that are here. And there are so many little different areas in Toronto too like Korea town, Greek town, Little Italy, and it’s great to see them on one big map so you can kind of just visualize the big picture.